To be honest, this post isn’t really 40 days of Twitter. However, it is the top tweets I’ve retweeted over the last 40 days. I thought it would be interesting, while battling this horrible sinus and ear infection, to do something inane like look over my twitter posts and see if they’re actually speaking to anyone. So, I looked over them and thought “Hmm, maybe I should share this with you guys just in case you don’t use Twitter. Here they are and I’d love to read your comments about them below.

I’m posting the tweets from oldest to newest along with a screen shot. The screen shot, in some cases, can’t show you how many retweets and, because of the nature of Twitter, some retweets don’t show up as such if someone slightly edits the tweet. These things may show up in my feed if I’ve been given credit for the quote or showing where it’s found but that doesn’t always occur.

This tweet came after a conversation with an agnostic friend who didn’t realize a “liberal Christian” such as myself actually believes in the literal resurrection of Jesus. 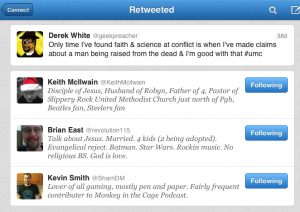 This tweet came from my trip to ComicCon to attend seminars on iconic characters in popular culture. Kenny Klein was speaking at this one. I’ve met Mr. Klein at GenCon but I’m sure he doesn’t remember me. 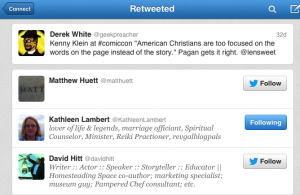 I tweeted this while sitting in the Hobbit with my wife on our 19th wedding anniversary. It was such a good line and I was afraid I’d forget so I decided to send it out into the world. 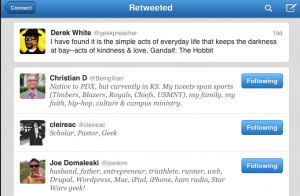 This was probably the most popular tweet I’ve ever posted. I could be wrong about that so I’m not going to be definitive. When I look at the original tweet, I believe it says it was retweeted 13 or 14 times but there were days later when I’d get “pinged” that it was going around once more. I didn’t think it would resonate with so many people and I’m glad it was able to. I posted this due to some reading I’d been doing on pastor burnout and creativity in ministry. It’s related to some articles I’d been reading about Google & Apple.

Free market creativty is for the church as well.

Again, this is another post that occurred after a conversation with an agnostic friend as well as reading The Authenticity of Faith which I mentioned in my last blog. 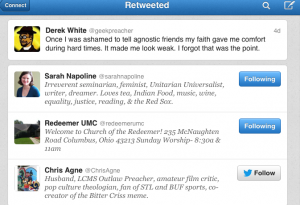 I’m still not sure what prompted these thoughts but since I’ve found sacrificial living to be an essential part of the faith journey this could be why this came up. 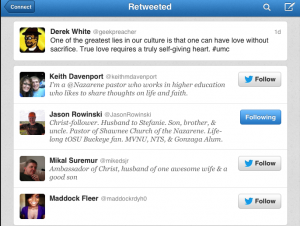 This last post is the one that spurred me into doing this as I was awake all night fighting this blasted sinus and ear infection. I couldn’t sleep so I started following Twitter feeds and Leonard Sweet came across my feed with a riff on Jeff Foxworthy ala Methodist Style. So, I decided to play along and was amazed by the response. 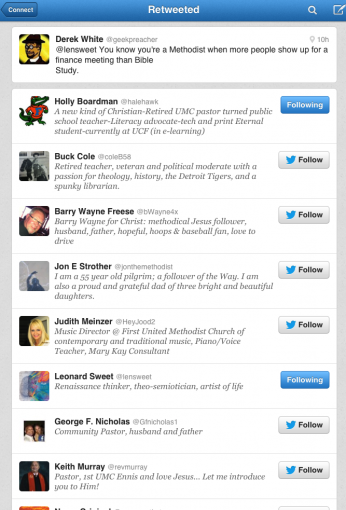 You know you're a Methodist when...

I hope you’ve enjoyed this little thought experiment. It’s a product of my sleep deprived mind and I hope you find it fun. Most of all, I’d really like to get your thoughts on this and various other topics that come to mind.