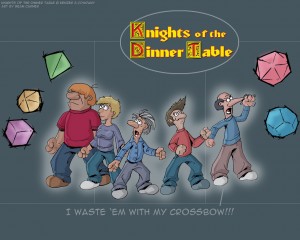 In honor of the Knights of the Dinner Table: Live Action Series hitting its Kickstarter goal, I thought I’d write a post about its creator, Jolly Blackburn.

My wife and I first met Jolly Blackburn, creator of the gamer comic Knights of the Dinner Table, in 2003 at Midsouth Con in Memphis, TN. This was a time in my life when I had turned my back on ministry because I was tired of the frustration of trying to “sell myself” to churches to get a job doing what I felt called to do. Well, that was a major reason. The other reason was I also had become very tired of the nitpicky doctrines I had to sign off on as well. (Long story short, I was on a journey to realizing this whole Christian thing is about Jesus. He summed it up best when he said, “Love God with all you’ve got and your neighbor as yourself.”)

What’s this got to do with meeting Jolly? Well, Jolly didn’t know when we met that I used to be a preacher and that wasn’t something I was openly sharing with the gaming community. Too often, gamers and geeks had been mistreated by Christians and, at that point in time, the gaming community wasn’t too accepting of people of faith as well. They were, rightly so, a little gun shy. So, I kept things on the “down low.” Besides, I’d turned my back on this ministry thing, right?

Jolly and I met after the opening ceremonies of Midsouth Con. I had been to MidSouth Con a few times by this point in my life but, as a gamer, I never went to the opening ceremonies. Why would I want to go to that? There’s gaming to be done! However, I knew Jolly would be there and I thought it would be a great chance to meet him. I was afraid I’d have to wade through the crowd to meet him but, since that crowd only contained my wife, me, and maybe two others it was pretty easy to meet this guy.

This was our first conversation as I remember it. I walked up to Jolly and said, “Hey, man, I love your comic! I’m glad to finally meet you.” Jolly said, “Oh, wow, there are gamers here? Man, they asked me to come as a comic artist Guest of Honor but I’m just a gamer. Where are all the gamers?” I laughed and said, “They were here hours before the Con started and are already playing games.” He said, “Really? Dude, can you show me around when I’m free? I want to get my game on.” At that point, a friendship began to develop…a good friendship. (I could mention the “Drunken Orcs at the Gates Game” but I think the video is still floating around the InterTubes somewhere and I will let it speak for itself.)

Jolly and I stayed in touch over the years through the KenzerCo forums as well as email and various other social media and we seemed to hit it off. It wasn’t until a few years later I first met his wife Barbara (Barb) and found out what an amazing person she is. Oh, she is a pretty humble lady and, if you don’t know her, may not realize her pure awesomeness. She’s kind, considerate, nurturing and a great human being. I also found out she’s a devout Christian. This meant, wonder of wonders, I could sit down and talk gaming and comics with Jolly and then, in the next breath, look over at Barb and discuss some faith topic we were both interested in.

Truly, I couldn’t have asked for a better friendship to develop. And this friendship has led to some interesting times and places. Because of Jolly and his ability to make friends with almost anybody I found that, when I returned to ministry, knowing him kept others in the gaming community from shying away from me. Come on? A preacher among gamers? That can be scary for some folks if not downright intimidating.

Jolly, in one way or another, has helped introduce me to gamers and geeks from other faiths, people who claim no faith, and people who couldn’t give a rat’s behind about any of this spirituality stuff. Without Jolly as a friend, I don’t think I would have been as welcomed as openly as I’ve been among the gaming community. I mean, come on, this is guy you have to work hard at to dislike!

And why did this happen? I don’t really know. It’s definitely not something I planned or expected. All I know is I was a fan wanting to meet a writer and I was more than willing to help this guy find a game. He was also open to making new friends. In fact, he is so open and nice, those of us who know him get a little protective. In the gaming community there is always someone trying to promote the newest and greatest hit….and all they need is YOU to support them.

It’s tough because being a geek is all about making new friends among those who like strange and wacky things. At least, I like to think so. And Jolly is the type of guy who was willing to make new friends. He is someone who is not afraid to take a chance on people. I think this is a pretty good Christian sentiment and one I’m still working on…making new friends. Even ones who can be a bit frustrating and needy. Or especially ones who are a bit frustrating and needy?

In the end, I’ll sum this whole post up with this: “Go out and make new friends. If you’re a gamer and/or a geek, it’s always nice to have someone else to hang out with and, if you’re a Christian it gives you the opportunity to help someone in need and maybe spread a little bit of this Jesus guy around. If you’re a geek, gamer, and a Christian, well, I think you’ve hit the trifecta and should have the best of all worlds.”

One Response to Making New Friends