Who is a Geek? 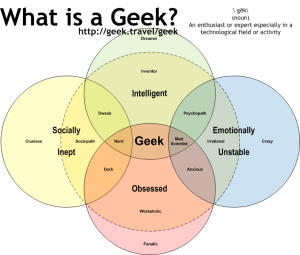 If you read my home page, I’ve defined geeks this way for many years “A person with a devotion to something in a way that places him or her outside the mainstream.” I still believe in this definition but I need to make an apology…an apology for my own hypocrisy. For a very long time, I have been telling people to find their “inner geek” and have told numerous people each of us has a bit of geek inside of ourselves. However, I don’t know if I have fully lived into that truth.

With the recent article Booth Babes Need Not Apply written by Joe Peacock and posted on CNN, I felt myself readily agreeing with him in a number of ways. I have read a number of posts since that time and I realize others saw things in the article that I failed to see. I saw the article as being opposed to those “faking” their geekiness but there were a number of underlying issues going on in my own subculture that I’d failed to comprehend.

One of the main areas is the way women are often treated in many geeky hobbies. In the sci-fi, comic, and fantasy side of geek culture, women have long found themselves objectified. The boys only club mindset has prevailed in a number of areas in geekdom and, honestly, I have never fully understood it. As a young man, I often wished I would meet a geeky girl long before this was seen as popular or “sexy.” I just wanted to meet someone of the opposite sex who had similar interests as myself. This, for me and many other geeky guys of my generation, was something virtually unknown.

When we fast forward to today, we see a proliferation of women in the geek culture and many of us are excited about it. Women bring an entirely different perspective to the hobby and often have insights men have often overlooked. As a husband to a geeky wife and father to a geeky daughter, I am continually amazed at the way they help me see my own world.

So, where does my hypocrisy come into the picture? The simple truth is somewhere deep inside I have never liked the idea of “popular” people claiming the title of geek. I have heard athletes, models, and even Miss America claim to be geeks…..and it made me mad. Why? Why was I so mad? Well, I didn’t feel like they had earned the title. For those who came up as nerds, dorks, and/or geeks in my generation, it generally meant you received quite a few butt kickings and often didn’t have too many dates. When someone who has went through all of these things sees people claim this title whom we don’t feel “paid their dues” we tend to get mad about it. (I am reminded of early Christians who went willingly to martyrdom to “prove” their faith. I think I, as well as many others, have had a martyrdom complex for too long.)

The problem is I don’t know what dues these people may have paid for their geekiness. I don’t know the scorn or derision they may have received in their lives nor do I know if they hid their geekiness as some deep, dark secret they weren’t able to share with their family and friends. (Having met a few people like this over the years, I am coming to realize there are more of these types of geeks than you might imagine. The tears I’ve seen coming from a man who was afraid to share his geekiness with his family nearly broke my heart.)

The sad reality is I have been doing the one thing Christians are often accused of: being judgmental. This is an area I’ve specifically tried to avoid in my life and ministry over the last five years but it still retains a foothold in my heart. So, now it looks like I have yet another unresolved area of sin in my life I need to get over.

Now that I have admitted my own failing and sinful hypocrisy, I do need to make one last point. Christians are often accused of this particular sin and, sadly, the accusation is more often true than not. As human beings, we seem to hate hypocrisy in others but are very good at overlooking it in our own lives. It is painful to be that self-aware and we don’t like it so we find it in others and try to squash them as quickly as possible. (Note that my phrasing is intentional. Human beings don’t like to squash hypocrisy, we like squashing the hypocrites. It’s much more fun bringing someone down than actually bringing a change about in their lives, right?)

For many of us in the geek community, we have become angry as we have seen our hobbies infiltrated by someone trying to make a quick buck. We get even angrier when we see a man or a woman acting as if they’re into our hobbies just so they might be able to sell us another piece of merchandise. We want to purify our hobbies of all those we deem “inferior” or not properly “initiated” into its mysteries. Sound familiar? Have you ever heard of the Crusades or the Puritans? Aren’t we, as geeks, being just as bad as those exclusionary people who have gone before us?

At the risk of being accused of being a “dirty hippy”, the key to all this frustration, anger, and attitude is we all need to learn to get along. Forgiveness, acceptance of all people, kindness, mercy. Does any of this sound familiar? Let us hear the words of Jesus, brother and sister geeks, and try and live by them, “Do not judge others, and you will not be judged. For you will be treated as you treat others. The standard you use in judging is the standard by which you will be judged.” (Jesus, The Gospel of Matthew 7:1-2, New Living Translation)

One Response to Who is a Geek?