So, what is a geekpreacher? Well, a geekpreacher is someone that realizes that geeks need a pastor too and tries his or her best to share faith and spirituality in a way that compliments geek culture. In the past, geeks have felt ostracized by the mainstream church and have often found themselves feeling left out of faith communities. Many geeks have even been told that to be a good Christian they have to give up those things they enjoy as a geek.

They couldn’t be more wrong! The hope is that geeks of all stripes realize there is a preacher out there that understands and owns his geekdom. The Geekpreacher has been a geek, nerd, dork, or whatever else you could think to call him long before it was cool. He truly desires to let all the other geeks know that there is a voice in the Christian community that understands their love for all things tech, SciFi, Fantasy, gaming, collectible, comic oriented or just outright odd!

Geek culture may have become more mainstream over the past few years but, for many, they still find fitting in to some type of spiritual life rather challenging and The Geekpreacher tries to help anyone no matter where they are in their journey.

Now, you ask, who is the geekpreacher? Well, the geekpreacher is Derek W. White who has served as a minister in various denominations over the years and is currently a minister with the United Methodist Church within the Memphis Annual Conference. He is working on his Doctorate in Semiotics and Future Studies through George Fox Seminary where he studying the signs and symbols of geek culture. He graduated from Memphis Theological Seminary with a Master’s of Divinity and received his Bachelor’s Degree in Organizational Management from Bethel University.

Derek has a varied church background since he was not “raised in the church” so if you ask him whether he is Methodist, Baptist, Pentecostal or Catholic, he will answer either “I’m a Christian” or a Jesus follower depending on what mood you find him in. Sometimes he just answers “All of the above.”

Where geekiness is concerned, he’s been a geek for as long as he can remember. Comic books were the beginning, seeing Star Wars in the theater as young boy, learning to play D&D in the early 80s, watching the rise of video games along with a growing passion for computers, science fiction, fantasy, theology, history and a wide range of other topics has pretty much made him the penultimate geek.

Contrary to popular belief, geeks also marry and have families. Pastor Derek has been married to his wife Jennifer since 1993 and has two children, a dog, a cat, and an extensive Dungeons & Dragons collection. His wife is making him thin out his comic book collection but, thankfully, there’s an app for that on his iPad. 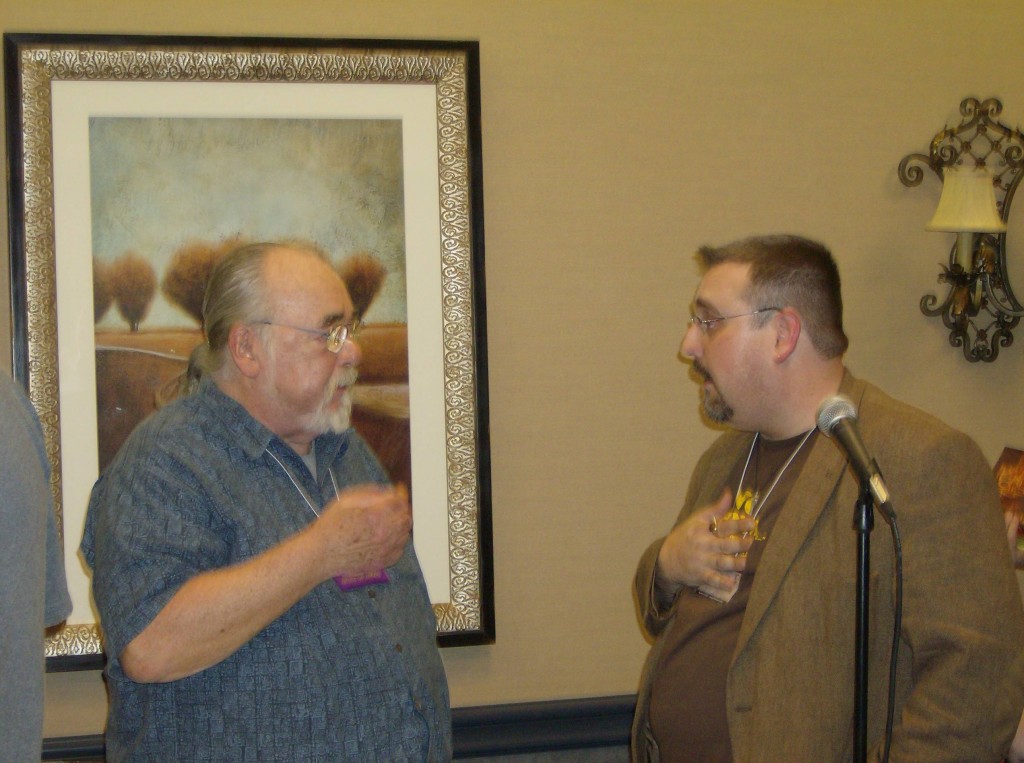 The Geekpreacher at GenCon 2007 with the Co-creator of Dungeons & Dragons: E. Gary Gygax