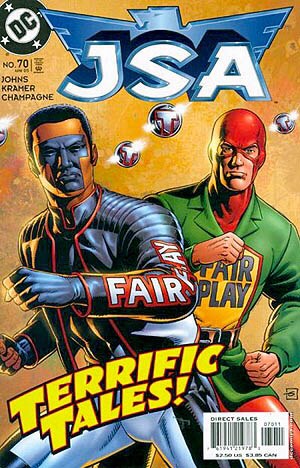 I recently came across a question in a Christian group on Facebook which asked, “What is the difference between fairness and justice?” I thought about it and want to answer this question from a pop culture and geek perspective while throwing in my own Christian perspective.

Please note I’m not directly addressing this topic with the more academic and theological defintions of justice. While they inform my thoughts, I want to address these words from how I have seen them play out in the real world.

Fairness is a concept we often find on the ball field and in a variety of sports. “Fair play” is usually centered around the idea one should make everything as equal as possible to ensure people have the same chance in a given activity.

You see it in golf when the better opponent willingly takes a handicap before the game begins. You also see it in chess when a master grants you extra moves or plays without an essential piece or two.

Fairness, at its heart, is about making everything more enjoyable for all. The chess master or golf pro is challenged when they take a handicap and the person playing against them has a better chance of winning. This makes the game more enjoyable for both parties and they both have an opportunity to improve their skills.

Fair Play is also something seen in the comic book character Mister Terrific. Both incarnations of the character, Terry Sloane and Michael Holt, are men with amazing intelligence and physical abilities. Their concept of Fair Play is rooted in taking up the mantle of helping those less fortunate than themselves. Sloane’s character even started “The Fair Play Club” to help young people held back by juvenile delinquency.
As for Justice, in popular culture, there are two views which people often argue over and can’t seem to get on the same page. This occurs, in my opinion, because of the propensity in our culture of believing one’s own view is the only correct view.

The first view of justice involves retribution. If you have done something wrong, then you must pay for your crimes and/or mistakes in one way or another. You deserve to be punished for your wrong doing and justice demands it.

This is seen in TV shows and movies quite a bit. The Punisher and Daredevil are two popular examples.

The problem we face is when people don’t think it’s “fair” when someone they believe should experience retributive justice instead receives restorative justice. The young man who kills someone through an act of cruelty and violence should be punished yet the court system finds out the details of his childhood and places him in a program to help him overcome a horrible childhood and then returns to his community to lead others out of this downward spiral is a great story….except for the family of the original victim. They still want to see retribution.

Notice then, in my definitions, fairness can only occur (and by implication restorative justice) when one in the position of power willingly handicaps them-self to give the one in a lesser position a hand up. In the example above, those in society who are judging the young man have handicapped society (power) by willingly paying to make sure this young killer is restored to a place where he can bring about life.

Retributive justice, as has been seen in the Scriptures and we see in the world, occurs when those in power feel they have been wronged. (Nebuchadnezzar and the three Hebrews. Jesus, the Temple leaders, and the Imperial state.) The powerful cannot stand to be challenged therefore they pour out retribution on those who they see as challenging their authority.

Interestingly, in popular culture, retributive justice is seen in a very different way. Characters such as The Punisher and Daredevil become agents of retribution for the weak and powerless. This is a fairly modern concept though we can look back at stories of Robin Hood, “stealing from the rich and giving to the poor” as part of this development.

It is at this strange crossroads the Christian then must examine them self and the Scriptures while seeking a way forward.
The difficult part is our sense of fairness! Those who are weak often wish to forcibly handicap those in power. In doing this, the powerful will receive retribution for both perceived and real abuses while the weak believe themselves to be receiving restoration.

The Christian story, however, does not advocate this path. It calls the powerful to willingly handicap themselves. They must set aside their authority and privilege and become a servant. The weak are called to turn the story upside down and to see their very powerlessness is what makes them strong.

The disconnect comes when either one or both parties does not embrace their path. Powerful people who refuse to handicap themselves become autocrats and dictators. Weak people who refuse to see the power inherent in weakness can become abusers to those within their limited sphere of influence.

And it is at this point we need divine intervention. We need the Story of the God who became weak. The God who set aside power and authority and gave it to lesser beings. This same God embraced this weakness and, in doing so, became, in the words of Obi Wan Kenobi, “more powerful than you can imagine.”