The Theology of Werewolves 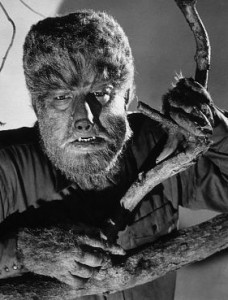 I remember the first time I really began to like werewolves. I was 13 years old and bought my first real “Do It Yourself” Halloween costume. It was the kind that had latex, paint, spirit glue, and lots of other accessories. I worked pretty hard on it and wore it to my High School’s Halloween carnival. What made me really like this costume was it was the first costume I’d ever worn in which no one recognized me. I could act gruff, foolish, silly, and a little bit odd (you know, me acting NORMAL) and no one seemed to recognize me.

At the heart of it, this is what I think being a werewolf can be about: Transforming into a creature no one recognizes so you can either act differently from your “proper” self while giving into your more bestial nature.
In preparing for this message, I decided I needed to watch a wide variety of television shows which featured werewolves since this is what seems to be the best place to find this rather popular creature. Shows such as Wolf Blood, The Originals, and a variety of others were poured over. I also took time to make sure I watched and rewatched a few werewolf movies. Movies such as An American Werewolf in London, Curse, and, of course, the original The Wolfman starring Lon Chaney were viewed with a great amount of pleasure. As an aside, I sometimes think An American Werewolf in London may have been the one I first saw. I still remember seeing it as a young man and the story and special effects sticking with me to this day. Out of all the movies, though, I found myself returning to the original black and white with Lon Chaney. Why? Because the spirituality in the movie was so clear and religion and superstition were not avoided. In other movies, these things might be mentioned but they were often avoided or, at times, made out to be a joke. In the original, these themes just seemed so natural.
So, you’re going to need a little background of The Wolfman movie in case you’ve never seen it. Lawrence “Larry” Talbot returns home to England from America after the death of his older brother to help his father, Sir Jon Talbot, with the family estate. During the process of killing a werewolf who is attacking a young lady, he finds himself bit and later becomes a werewolf himself.  Larry struggles with turning into a beast and finds himself rampaging through the countryside killing innocent villagers. He is eventually killed by a silver cane he had purchased earlier in the movie…a can wielded by his father, Sir Jon.
Now, I should take a moment and talk about the term used to describe a person who turns into an animal. That word is lycanthropy and I’ve been familiar with it over the years. The interesting thing is the Scripture I chose for today is from Daniel 4 and, in the Wesley Study Bible, it uses that very word to describe what happens to King Nebuchadnezzar. It defines lycanthropy as, “a known psychosis in which people imagine they are animals.”
<Read Daniel 4:28-37 and give background>
In the movie, Sir Jon Talbot defines this lycanthropy while talking to his son as, “a technical expression for something very simple: the good and evil in every man’s soul.” And is best seen in the words of a poem recited several times during the film:

Even a man who is pure in heart
and says his prayers by night
may become a wolf when the wolfbane blooms
and the autumn moon is bright.

Even a man who is pure in heart
and says his prayers by night
may become a wolf when the wolfbane blooms
and the autumn moon is bright.

Sin scratches at the door of each and everyone of us and it is through no fault of our own. It is just the way of the world. What, then, is the solution? Do we stop doing good? Do we just drift to the side? Do we avoid as much as we can so as to keep ourselves safe? This is how holiness has been defined for so very long. Avoid the world. Avoid sin. Avoid anything that might have the semblance of the monstrous about it.
Yet, this is not the way Jesus is…Jesus comes across this man filled with demons…filled with beasts…and Jesus grants him hope, freedom, and healing. Then this Jesus does the unthinkable. He casts those demons into a bunch of swine who run off a cliff. And then all the people celebrate because their friend is now in his right mind? They throw a party because the prodigal has come home, right? No. No. No.
Instead they’re afraid, angry, and upset. Why? Why would they be so angry? Well, Jesus just cost them a lot of money. These people were Gentiles, obviously, because they raised and ate swine. Now, I don’t know about you but I tend to eat pork quite a bit. Every where I turn there is pork for sale. Why? Because it’s easy to raise, easy to sell, and easy to cook. It was the same way in Jesus’ world. Jesus, in healing this man, just hit these people in their own pockets so He might bring healing to what they saw as an undeserving monster.
So, the question of the day is, “How will we react when Jesus does something amazing to the beasts within our own hearts? Are we willing to pay the price?” I believe most people would say, “Yes” they are are willing to pay the price of time, money, and effort when it involves ourselves and possibly a close family member. However, are we willing to pay the price when it involves those beasts “out there?” Those monsters lurking in the graveyards of the world around us? Are we willing to put in the money, time, and effort to see Jesus heal the outsider, the stranger, the beast roaming the tombs of this world?
It is a costly thing to follow this Jesus and it’s even more costly when we see Him working in the lives of others. When following this Jesus, we pay the ultimate price when we willingly give up our lives for others. “No greater love has a person than this, than to lay down their lives for their friends…” but isn’t the greatest love of all to lay down our lives for our enemies?
To destroy the curse of the werewolf we need Jesus. We need the one who has the power to grant the request of healing so needed within our souls and the souls of those around us. We just need to make sure it doesn’t cause us to run this Jesus off when the price of it hits too close to home. At the end of the day, we need the help of heaven right here and right now…and that help is found in the person and reality of the Living Lord Jesus.
Today I want to end with the words of Sir Jon Talbot from The Wolfman, “You know, Larry, belief in the hereafter is a very healthy counter balance to all the conflicting doubts man is plagued with these days.” Those words were said in the mid-1940s to a world in crisis yet they still ring true today. So, I’ll phrase them to be a bit more theologically correct, “You know, folks, belief in a real, living Jesus is a very healthy counter balance to all the conflicting doubts humanity is plagued with these days.”
Would you believe? Would you be healed? Come to this Jesus. Come…come to this Jesus and find blessed assurance…find a foretaste of that glory divine.
This entry was posted in Christianity, church, Halloween, Individualism, Jesus, Ministry, Movies, preacher, religion, Sin, spirituality, Theology. Bookmark the permalink.