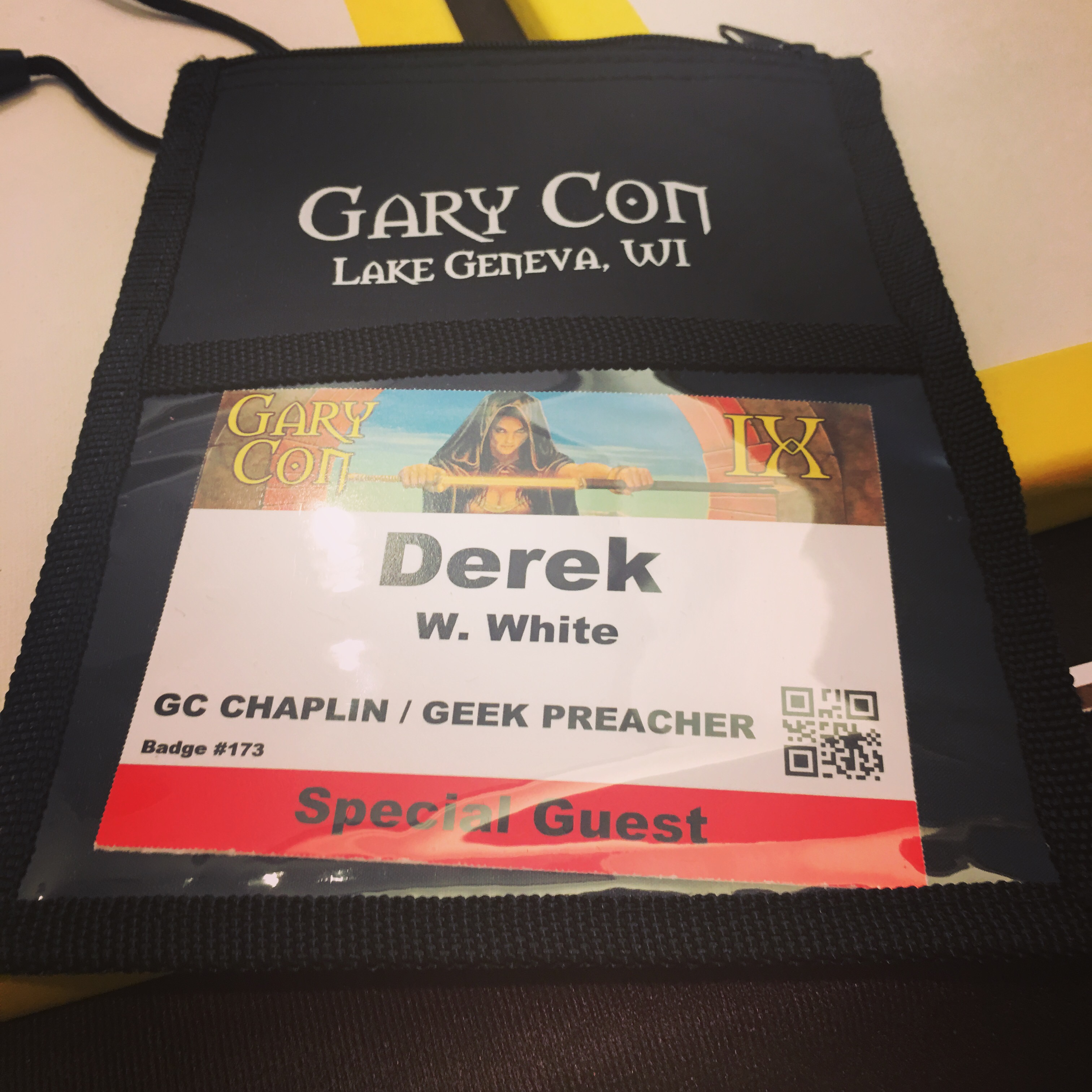 Three things happened at Gary Con this year that really stand out. First, of course, is this is my first year as the official Gary Con Chaplain. (Yes, they spelled chaplain wrong on my badge. It’s all good.)

I’ve been serving as an unofficial chaplain and behind the scenes volunteer for the past few years but this year Luke Gygax made it official. It was a strange feeling and, honestly, I was a little nervous. Considering the strained relationship gamers have had with the church, I wasn’t sure how people would react. I’ll say, so far, the responses have been overwhelmingly positive.

This leads to my next stand out moment. I sometimes have trouble sharing moments like these because they can fall into the “toot your own horn” category but, as you’ll see, there is a reason for it.

On the first day of Gary Con, a friend I’ve come to know over the past few years came up to me and said he needed to talk. He was facing some turmoil with work and, after he shared with me, I asked if I could pray with him. He was amenable and we prayed.

A day or so later he came up to me and shared something I’d not known. He said, “Derek, you’re the reason I’ve become more open about my faith.” I was, to say the least, shocked. I had not expected to have had such an impact on someone and, honestly, I didn’t think he had been closed off about sharing his faith.

Now, you have to understand. My friend wasn’t ashamed of Jesus or faith. He simply wasn’t open about it because of the negative way in which many Christians have historically approached our geek/gaming community.

Many in the gaming community remember the hurt brought upon them by the church but we often do not realize the pain those who remained in the church bore as well. They carried the pain of the gaming stigma within the the church and many had their commitment to Christ questioned because of it. However, they also bore the stigma of “Christian” when around their friends in the gaming community. They found themselves hiding their true identity from both of the communities which they deeply loved and this led to a deeper amount of pain. Many of these Christian gamers still live in doubt and fear wondering if they can truly be both.

That’s where people like me come in. When my friend shared this with me, I realized something which has been bubbling under the surface for years. It seems a major part of my calling to this community is to those Christians who have been hurt by the church. Over the last decade, I have heard too many stories about how churches turned away and/or shamed Christian gamers and their friends.

As a Christian, I’m called to let the love of Christ shine from my heart to those outside the faith but I’m also called to let it shine to my brothers and sisters in Christ. This light is to be an encouragement to them so they to might be beacons of God’s love as well. But this isn’t just my calling….this is the calling of all Christians.

I’ll close on this final note. On Sunday, we had our Love Feast and it was a time of friendship and sharing. While this service was an interfaith service, I could tell many wanted something a little more. Therefore, I think next year I may be having a short worship service on Sunday while, on Saturday, having “table time” with anyone who wants to come.

Oh, one last thing. Also on Sunday while I was standing outside HQ a man walked up to me and asked if I would give his daughter a blessing. He mentioned he had adopted her and wondered if I would do this for him.

While I’ve baptized more than a few infants, I’d never been asked this before. I was both humbled and honored. I stumbled through that blessing but, tonight, I will remember that little girl in my prayers. It’s moments like this that truly make it all worth it.

This entry was posted in Uncategorized. Bookmark the permalink.