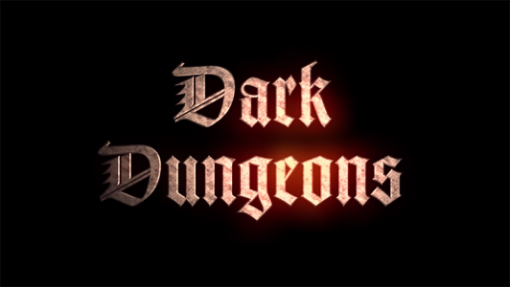 My GenCon experience this year has been a very tiring one. I spent a great deal of my time in the Christian Gamers Guild/Fans for Christ booth but also had some time to sit outside and talk with many of my friends in the gaming industry. The panel and worship service were both loads of fun and I enjoy participating in them but, I must say, it all really wore me out.

The most interesting experience I had this year was viewing the premier of the movie Dark Dungeons. For those of us who lived through the “moral panic” of the 1980s, we are very familiar with this movie. For those who aren’t, it is based on a Jack Chick gospel tract of the same name, which purported to educate people on the “evils” and “demonic nature” of Roleplaying Games. In short, this gospel tract tells parents this type of gaming is an entryway into the occult and will lead them to joining a witches coven.

I have to say when I first found out about this movie I was Bothered About Dark Dungeons (heh). Why? Well, in looking at the website, I saw that it was meant to be as close to the original gospel tract as possible. The people behind the film were taking it very seriously and I was afraid on two fronts. First, that this film would be used as a way of trying to once again prove the evils of Roleplaying Games and, second, this film would actually be a parody used to make fun of Christians. Either option, for me, would not be a good one. As someone who has tried to build bridges between the geek community and the church, I thought this would tear away at much of the work I’ve been doing for the last seven years.

Before I share my thoughts about the movie, it is necessary for me to talk about my own experiences with the moral panic of the 1980s as well as a part of my Christian journey at that time.

I was raised in what I often refer to as an “occasional Baptist” home. This simply means that when we went to church, occasionally, it happened to be a Baptist one. In the part of the South from which I’m from, most people are culturally Baptist to one degree or another. I say this to let you know I didn’t have a steady diet of Sunday School or preaching which heavily influenced me. Most of my understanding of Christianity came from TV shows such as a Charlie Brown Christmas and various other holiday specials. I thought Easter Sunday had more to do with a bunny and candy than it had to do with the Resurrection of Jesus. 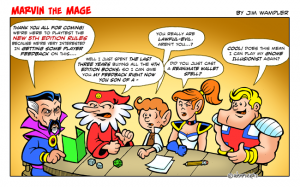 Sometime between 1983 and 1984, I picked up my first copy of Dungeons & Dragons. I was interested in it because I had seen some guys playing it during recess at school and these fellows seemed quite cool to my teenage self. (Yeah, I’m that much of a geek. People playing D&D seemed cool to me.) I really wanted to check this out. Having read quite a bit of fantasy and science fiction by this time, I have to say I was quite intrigued. 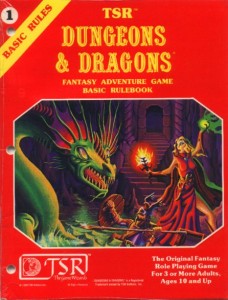 When it got close to spring, sometime in 1983 or 1984, we were on Mardi Gras break from school. (Louisiana schools have cool holidays like this one.) My mom and my stepdad decided to take us on a trip to visit my stepdad’s brother in Texas and, while out shopping, my mom and my step-aunt decided to go a HUGE mall. As we were walking around, I noticed something I had never seen before: a game store. This being the 1980s, gamestores such as this one had no video games but they did have lots of miniature games such as Warhammer and various other tabletop wargames. There were also interesting games by companies such as Avalon Hill. It was all quite a new experience for me. I broke away from the party and went in the shop and my life was changed forever. As I walked around looking at the various terrain and painted miniatures, my eyes fell on a shrink-wrapped Dungeons & Dragons booklet. It was the Tom Moldvay Basic D&D book and looked absolutely gorgeous. The image of the dragon on the cover fighting a female magic-user and dwarf will be forever etched in my brain.

I immediately left the shop and began to beg my mother to buy it for me. Like any mother who takes their child to the mall, her response was an emphatic, “No!” I kept pleading with her but since she’d had the experience of raising three other children my cries of despair fell on the deaf ears of a 20th level parent. However, my step-aunt, Gwen, who had less experience with children was found to be more receptive to my charm spell and agreed to purchase this $5 booklet for me. When we got back to her house, I immediately devoured its 64 pages. Sadly, though, I immediately realized I didn’t have any of the interesting dice the game seemed to require.

When I returned home, I showed this book to the guys playing D&D at my school and it seems I was now “in.” The cost of admission to this group of gamers, for me, was having a D&D book, as they were fairly hard to find in our rural area. (I later found out our nearest gamestore was in the neighboring large town in which my father lived.) My gaming with this group of young men was often sporadic and mainly consisted of me running a quick adventure during recess or in the library when we had free time. I was the DM who would give them cool magical items for when they played in the other DM’s game. We Monty Haul’d it like crazy.

Occasionally, I had the opportunity to play with all the guys over at Roger’s house (Roger’s dad was a Baptist Deacon and, I believe, later became a Baptist minister). My gaming with them often turned into my character getting killed rather quickly by another character and then I would help the DM run the game. (Interestingly, I often played the cleric. Who in their right mind kills the cleric? To this day, I play cleric’s rather rarely though am known to play druids occasionally.)

As we played, most of my friends and I were tangentially aware of the moral panic occurring at this time. Rumors would go around of parents burning their children’s D&D books but most of us laughed at it because we all seemed to be fine. Then one day I came home and found all my D&D books spread out on my bed.

(By this time, my collection had grown. I was known for saving my money and being frugal with it. However, I now found that most of my spare money was eaten away by Dragon Magazine, D&D, Savage Sword of Conan comics, and a few computing magazines. )

With fear in my heart, I asked my mom, “What’s up with my books?” She replied, “Nothing to worry about. Just put them back up.” She then took a piece of paper and threw it in the trash. I continued to ask her and she explained to me, “Our neighbor gave me this piece of paper listing all the evil things in those books of yours so I thought I would check it out. It’s all a bunch of **** as I can’t find anything in your books it talks about.”

I want to pause here and give my mom a big KUDOS for checking things out. She was never the type to just take someone at their word but always wanted to find answers for her self. She was pretty much self-taught about many things and had a tremendous love of reading which she passed on to me. As someone with only a high school education, she later began to work for a number of professionals and was known for being an intelligent, no-nonsense, business professional.

Being raised this way still has an influence on my life and who I’ve become. All that said, looking back on it, I realize the pamphlet she was given was one that describes the Little Brown Books which had been published almost a decade prior. I’m pretty certain of this as I remember some of things on the paper and now have a pretty extensive knowledge of the history of Dungeons & Dragons. (It doesn’t hurt that I consider some of the children of Gary Gygax, the co-creator of Dungeons & Dragons, to be personal friends. Shout out to Elise, Ernie, and Luke.)

I will pause the story here and try and return to it tomorrow. In the next post, I will discuss my faith journey and how, in spite of my mother’s excellent example, I burnt all of my Dungeons & Dragons books after coming to faith and how I later returned to gaming. (It seems this blog post is turning into more than I expected.)