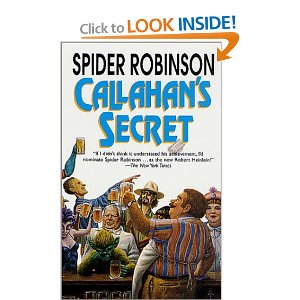 “If a customer cannot be seen, heard, felt, smelt, or dealt a hand of cards, if he casts no shadow, empties no glass, and never visits the men’s room can he really be said to be there? Even if you’re having a conversation with him at the time?”

I first read these Callahan stories in the early 1980s when my mother bought me a subscription to Analog Science Fiction and Fact magazine for my birthday. I was a voracious reader and these magazines brought me in to the world of science fiction in a new and exciting way. The Callahan stories were written by Spider Robinson and they were a mixture of humor, satire, and pundemonium. (Yes, I spelled that correctly. If you don’t get the joke, maybe you will before the end.)

One of the stories I remember reading was Involuntary Man’s Laughter (IML) and it was recently brought back to mind after reading a blog post from one of my former seminary professors, Andrew Thompson. IML was a heartwarming short story that set my young imagination alive but, in many ways, has a great deal to say to us today. Knowing that the story was written in the early 1980s, you should realize that it was very much ahead of its time.

This short story starts out with the Cheerful Charlies (a couple that cheer people up for a living) sharing with the people at Callahan’s Saloon a case with which they’re having trouble. A young man has a form of Tourette’s Syndrome that causes him to twitch and bark in such a strange manner that anyone who watches it will involuntarily laugh. The young man is very intelligent and had a great sense of humor until the disorder took full effect. As often occurs in the Callahan stories, the problem is brought before the patrons of the bar and an eventual solution is settled upon. And what was it? Well, they set up a dedicated modem (remember those?) connected to a keyboard and terminal where the young man could chat with the people at the bar and share in some of their more outrageous games. (One of which was making very bad puns.)

In today’s world of instant communication, this would seem to be a bit of a no-brainer but when it was written in the 1980s this idea was groundbreaking. Yes, the technology was available but the idea of multitudes of people around the world using such technology was a fantastical concept for most of us.

So, what does this have to do with Andrew Thompson’s recent blog, “To Tweet or Not to Tweet?” He states that, “Real community is something that happens ‘in the flesh,’ and it involves complicated relationships that must be navigated with care, sensibility, and ultimately love.”

While I try to avoid the heresy of gnosticism just as much as the next pastor, I have to disagree with Dr. Thompson. There are quite a number of online relationships that I have made over the years and many of them have grown through online communication. I stay in touch with people via Twitter and Facebook regularly and many of these people I have not had the opportunity to meet with personally. I have received phone calls and emails from people with theological, moral, family, and/or financial problems. Some have contacted me because they don’t feel as if they can speak with someone in their local setting and in many cases they just don’t have a religious leader whom they trust.

I have been building online relationships for roughly 15 or more years and I have seen it at its best as well as at its worst. The key to it all is knowing that the person on the other side of the screen is a real human being. You do need to have some type of contact and many people need an assurance that something genuine is occurring. This is why much of my life is lived online. This is also why I speak at conventions and make myself available wherever I go. I’m trying my best to live out the life of the Gospel but it is also important that people realize I am legit. Yeah, that’s the word…..legitimacy. This is what people are looking for in online relationships and, yes, online communities.

So, Andrew, (hope I can call you that) I would really like to talk with you more about this if you have a chance. As embodied beings, we do crave actual contact but in a world where that is not always possible we must find some way to facilitate community for those who are not in a place where it is readily accessible.

“…by that time Doc Webster had come up with the idea of Billy applying for a grant to start up a computer network for shut-ins, and we were all on the way to becoming good friends. Oh, once in a while I’d get a mental picture of the man on the other end of the hookup and giggle in spite of myself. But he never knew it. I’ve always hated that hairy old nonsense about high technology being inherently dehumanizing. And as Doc Webster said, Billy’s barks were much worse than his bytes.”