Florida, England, & GenCon or “How I Spent My Summer Vacation” 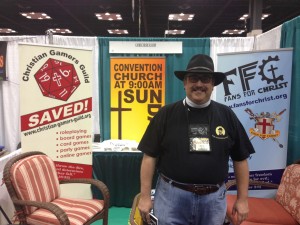 Getting Started at GenCon 2013

Sorry I haven’t blogged for some time. Life has been kicking me around with the busyness of everything. Long story short? Moved to a new charge in June of this year (United Methodist speak for moving to a new church and/or churches). Just a few days after the move, I headed to a worship conference in Florida to spend time with my mentor, Leonard Sweet. The folks at the Institute for Worship Studies really know how to blend together those Ancient/Future streams.

After just a few days there, I headed off to Cambridge, England for my Doctoral class. My time was filled with difficulty and joy. My friend’s rental car broke down on the M25 and turned a short trip from London to Cambridge into a seven hour roller coaster ride. This is the difficult part which is now a joy to remember. I also saw beautiful sites, while hanging out with my George Fox cohort, and I also got to know some of the Westcott House students at Cambridge.

I want to take time to thank one of those students, Mae Mouk, for showing me around. It’s quite amazing to end up in Cambridge, England and find someone studying for the ministry who just happens to have grown up in the same area of Louisiana as I did. There’s a certain level of synchronicity in all of this and I found it to be a grand time. (Plus, Westcott House rocks. I’m going to have to find a way to go back there some day and just audit one of their classes. It’s a place that’s filled with an evangelical spirit and a robust love for liturgy.)

I also spent some time in London and was able to visit Wesley Chapel. In fact, this evening at church I will be sharing some more pictures at church and talking a bit about Wesley’s England. It will be a good introduction into a two week discussion I will be doing on “Why I’m a Methodist.” As usual, if you stop by, I don’t think you’re going to get what you might expect. (For example, check out my last post on Celebrationism.)

After returning home from England, I had to prepare for GenCon. Ever since my first GenCon in 2007, where I had the pleasure of meeting E. Gary Gygax, this has become a great time of geekpreaching. I go to other gaming conventions to game but GenCon is the place where I’m truly ministering day in and day out and I love it! (Briefly define ministry…sharing the love of Christ as I see it in the world around me. Praying with those who just need a listening ear in the midst of the fun time of GenCon. Talking with industry folks who are struggling to make ends meet. This is the nuts and bolts.)

Oh, it’s draining on a number of levels and this year was even more so because I spent a great deal of time “manning” the The Christian Gamers Guild and Fans for Christ booth which was sponsored by Gamechurch.com. Yes, three Christian groups with different flavors and backgrounds supporting one another. It’s a novel idea, eh?

I also want to mention Mike Perna. He has a podcast called Gamestore Prophets and we were able to spend some time together. Mike is good people and one of the few I’ve met over the years who have served in active, vocational ministry and seem to “get it” when we talk about the “Geek Gospel.” Oh, I’ve met quite a few other ministers but not all of them are able to fuse those two worlds together. For some, there is the ministry and there is geekiness. They switch one off and switch the other one on. Other ministers show up out of a genuine interest in geek culture and this leads to amazing conversations. Some, I just haven’t figured out yet and that’s okay. Probably means they’re a geek. 😀

Then you’ve got guys like Perna. He gets it. Minister’s like Mike realize we’re geeks at our very core and that’s what makes us love theology, history, gaming, Dr. Who, D&D, and a wide range of other things. There’s something about the geek gospel that draws us to the misfits. Maybe it’s because we’ve been misfits and outsiders ourselves. Maybe it’s because this Jesus guy is still considered a bastard guy by some folks (and from a possible reading of John 8) but, more importantly, he hung out with a lot of misfits as well. 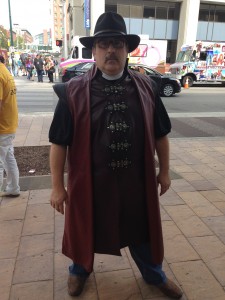 All those levels of cleric are finally working....

Now, back on track. Also at GenCon, I hosted the Christianity and Gaming Panel this year. We had a great time with Dave Mattingly, Jayson Elliott, and Larry Elmore and it generated more discussion than I’ve seen in the past. Hopefully, my friends will have those videos edited and ready to go really soon. I also preached the sermon at the annual GenCon Worship service and Tom Vasel led the worship. I really enjoyed it and thank Dave for giving me that standing invitation.

So, long story short, I got to talk with some great folks, meet with old friends, and pray with more folks than I’ve ever prayed with at GenCon. I like to think this comes from having a relationship of trust that’s built up over the years. For a long time, people would ask me if I was “for real” or just someone who downloaded an ordination certificate off the internet. Quite a few wondered if I was going to pull out a Bible and bang them over the head with it. Some were worried my only goal was to get them into my particular “brand” of religion.

Over the years, it’s taken some time to built up a certain level of trust and a major part of that comes from being authentic. You will find that I’m pretty much the same guy all the time. I might be a bit more intense in some situations but still the same person.

Last, but not least, I couldn’t do this ministry unless I was a pastor. I often feel overwhelmed by wearing so many frakkin’ hats but I’ve found out much of the trust I have in the geek community comes from being connected to a local church. I’m not just someone floating out in the world but a genuine minister with training and experience. The fact I serve churches seems to make people relax because they know I’m connected to people in real time.

While all of this costs me a lot physically, mentally, and financially, I wouldn’t trade it for anything. What kind of geek would I be to give up all these great learning experiences that I get to share with others each and every day?